Browsing other gaming blogs and found these projects that are doing the same thing I am!

Check em out, and if you can help them out, so much the better!

Got my new primer and have some test models drying as we speak, so look for WIP pics coming soon...
Posted by Gith at 7:30 PM No comments:

Based and waiting for primer

Just in time for the holiday weekend! I can't express how glad I am with being done with all the pinning needed for these guys... 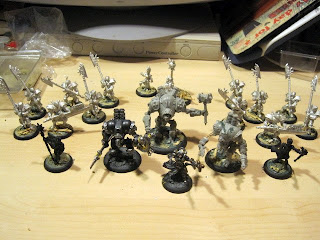 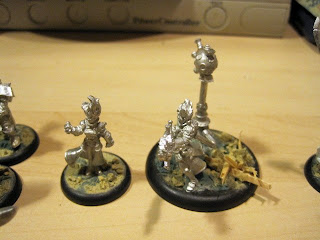 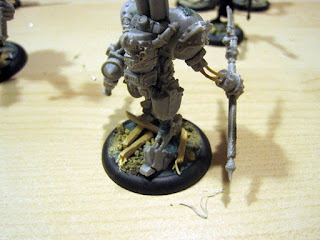 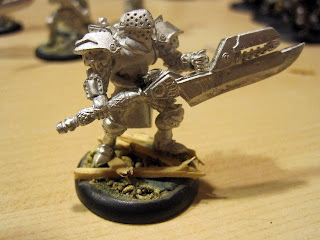 Thank goodness for improvised basing materials (popsicle sticks and crushed sandstone). I'm picking up my primer over the weekend and looking to charge into painting these noble warriors next week. My goal is to have these guys ready for a Christmas-time charity gift!
Happy Thanksgiving!
Gith
Posted by Gith at 5:12 PM No comments:

The force has been assembled! Huzzah! 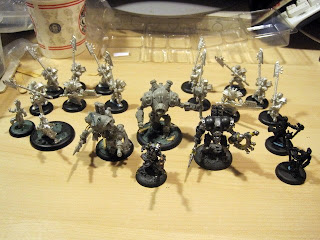 Here's a blurry close up of the final product for the beat-up firefly. I like how he turned out; taking the plunge to just chop up a brand new model was a little rough, but this helped build up the ol' confidence. 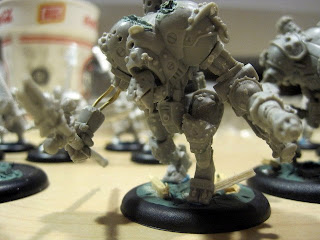 Hope you guys like how things are coming along!

Making the best of it

Upon opening the second firefly yesterday, I found that a part was missing. While it is a somewhat minor part, its the piece that connects the arm joint to the hand that holds the spear. If I try and just jam them together, it would look like a hand attached to an elbow. I was a little frustrated, as I was in a building groove, having just put together and based the ironclad and lightning tower, and decided to put things down and walk away.

Cut to 12:30am. Just as I was thinking about going to bed, inspiration struck (why does it seem like good ideas always wait to pop up as you're falling asleep?). eNemo has a spell called Failsafe, which lets a jack function with full systems until it loses its last box, no matter how much damage it takes. I thought to myself, what  would that look like on a jack that had really been run through the wringer? The image that flashed through my head was one of a firefly sprinting up the field, taking bullets, bombs, and blades, only continuing to move because of Nemo's magics, which invariably look like lightning.

So now I have some very trashed firefly parts, including a limb or two held on by "lightning" (pinning wire bent and painted, trying to think of some kind of texture. Maybe glue strings...). Here is to hoping that it looks like what I envisioned. 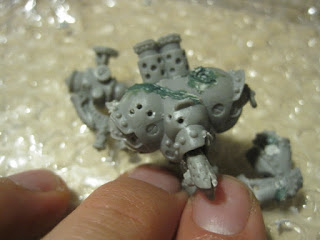 After picking at Nemo some more, I decided to move on an work on something else, as it seemed like I was starting to just swirl grey paint around his skirts in a vain attempt to figure out why they didn't look right (mostly sloppy brushstrokes that I try to cover and just make new sloppy brushstrokes). A couple of minor changes from yesterday, such as a darker brown insulation layer and some runes showing his front/back arc. All in all, I'm pretty happy with him and could call him finished, but hopefully I'll be able to improve my cloth/blending some more on the rest of the army and be able to finish him properly. 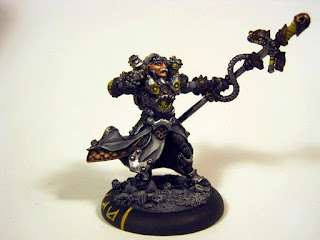 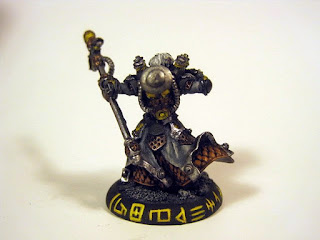 I'm trying to decide what to proceed with. Below shows the force in all its varying stages of glory, from the fully boxed to the fully painted. I want to do something really fun and dynamic with the last two jacks (Ironclad is being stolen from the battlegroup box until I get my Cygnar heavy kit in the mail), and I think some creative basing would do wonders for the otherwise atrociously boring stormguard models. The stormtower light artillery looks easy to put together and a lot of character. Lastly, the stormsmiths are primed and ready to paint, but need some attention to their bases. Where to begin... 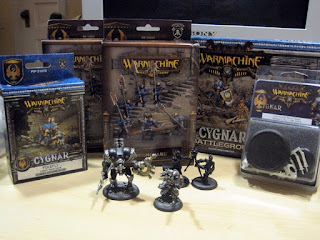 I'm going to call this my 'first draft'. It looks decent, but there are enough parts that just don't look quite right for me to call him done. Since he's the caster, and likely to receive the most close-up attention, I want to make sure to make sure he looks the best I can make him. The most glaring issues for me, after looking at these pictures (been staring at the model too long), is the insulation padding needs to be cleaned up, and I really need to practice the large areas of cloth, as right now they are just kinda blah. Also, my bronze sucks (gotten a little better with silvers; I like how the bottom of the tabard turned out) 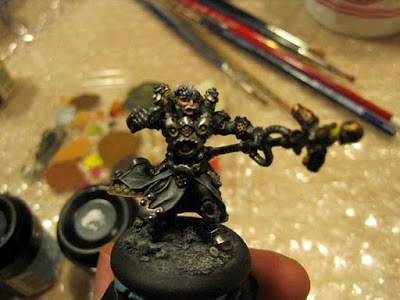 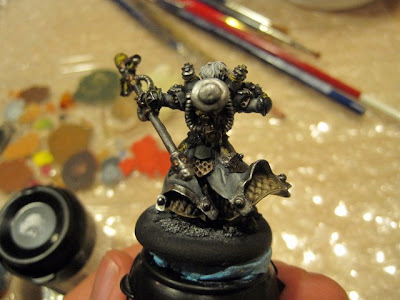 I'm having a hard time with my photo set up, but hopefully the pics are clear enough for some feedback, if anyone can give me some helpful tips and/or constructive criticism. In the meantime, I'm going to go study up and see how others have been making the shadows fall on him and see if I can't learn something.

I've taken my time with these guys (I think the process started in March) and played around with a bunch of new things on them, including scratch sculpting the arms and sword of Mr. Fighty McPuncherson (far left) and playing with various shading and highlighting techniques for metal and not. While I'm sure you can see a number of places I was messing around, I like the feel of the unit as a whole, and I enjoy painting the non-traditional color scheme I have for my trolls. 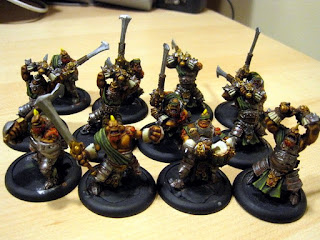 However, my trolls are going to have to take a back seat for a bit, as I'm going to charge headlong into the project I originally started this blog for (months ago) - The Livestrong Project! Check out my first post on this blog or the MWC link on the sidebar and scroll down through their site to find the original impetus for the whole thing. I'm really excited about it, as I have been staring at my eNemo longingly, and he back with mild disdain for the smudge I left on his face during base-coating two months or so ago.

P.S. I know they're bases look ugly, but unfortunately my basing materials are roughly 2,000 miles away right now in a loving living room. Hope to rectify that and my photo quality soon!
Posted by Gith at 11:13 PM No comments: